By Poetry Intl Uncategorized No Comments 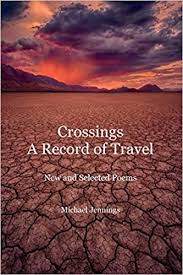 Review of Michael Jennings’  Crossings: A Record of Travel: New and Selected Poems

Michael Jennings’ Crossings: A Record of Travel is a collection of lyrical-narrative poems, a journal of the poet’s progress through time, across varied horizons, and within personally-significant as well as culturally- and geographically-shared landscapes, all presented in accessible and familiar yet original language.

The book is divided into two principal sections – “Summoning the Outlaws” and “the Dark Mothers” – each of which provides a framework for poet and reader to find our way forward together, to discover in a kind of recurring epiphany what is left “for the living” in a world “picked clean” by the wind, by the inexorable changes around us and within us. That journey, recorded or imagined by the poet, Jennings tells us, also provides contextual validity, coordinates of understanding, a kind of salvation, where the “bleak plain/lies echoless” and where “all the shapes of dread come welling up.”

The introductory poems of the first section locate the first horizon, the safe harbor where the poet’s journey begins – the American Southwest, Texas and Oklahoma – which then quickly stretches, as life unfolds, to the urban and agricultural landscapes of California. That first familiarity remains throughout the book as the imaginative anchor, “an image pressed/half on the mind’s eye, half onto some darkness/just out of reach” as the poems take the poet, and us, outward into the world. Because those poems reflect on the photographic work of Dorothea Lange, that image is also a portrait of a certain kind of dislocation, of unwanted and unexpected change, that parallels a painful migration in the 1930s from what became the deserts of the Southwest to the verdant valleys of San Joaquin, when “dust/and … wind” moved people to “a stunned stillness/where the wind has been” and “the long faces of worry/become the low eyeless dwellings of the horizon.”

That sense of movement out of a safe harbor and the unsure movement forward is a theme that undergirds many of the crossings in this book: the Iranian deserts he writes about, the rough landscapes around the Dead Sea, the distant urban locations of Eastern Europe, all the men and women there and elsewhere that he remembers and eulogizes. A crossing can be a difficult transition, a kind of pilgrimage, but it is also a process that enables Jennings to come to a profound realization: that the place from which he comes, Texas, and its history, no matter the distance he has travelled from both and no matter the changes of sense and perception he has gone through, provide for him a deep understanding that he is, at his core, part of an essential physical as well as metaphysical geography where “black skeletons of maples against a November sky/is all I know of heaven and all I hope to know.”

But there is more here. Part of the poet’s progress, part of the record of travel, is a reflective consideration of the world that existed “before speech,” a world of carefully arrayed natural histories, the underlying mythology of a world outside of language, experienced in natural cycles of the seasons and of birth and death – all outside human control but essential to our individual as well as collective existence. These are the essential foundations, he tell us, that enable him to come “through the … veiled streets/toward some clarity.” That clarity, though, is not found only in the underpinnings of a world that shimmers in its own silences. Jennings also considers the shaping influence of voices that moved the world into speech and banters with and sings with those poets and cultural figures: Lowell, Heaney, Hughes, Dylan, Yeats. In that way he affirms the geographies and journeys of his interior landscape and how those voices have helped to hone his vision of a world he can see and touch.

These ideas and connections are explored as well in the longer poems and poetic sequences in the book’s second section, “the Dark Mothers.”  In those poems, Jennings provides a contextual history of mind and of poetic vision that recognizes, as the journey moves to its cyclical ending and to a new beginning, that the experience is what is essential, that an engaged life is the goal, that it is the journey we record, each in our own way, that is the critical key, because “the rest was just history.” Once we are able to move outside the parameters of history, we become not just fully ourselves but we become “the wide earth listening,” and the burdens of pain we have endured on the journey will at last “bring lightness.” The book comes to its full circle in the closing poems of this section and ends as it began: with the movement of “desert sand under the scour of wind.”  But here, after the far-ranging and wide-reaching travel recorded in these pages, it is not a movement of dislocation; it is the coming to fulfillment, a progression, Jennings tells us, into the “forest of being.” It is there, of course, that we hope all our journeys will end. It is there, Jennings tells us, that we arrive, at last, “from a far country.” This book gives us a vision of how it is possible to find the coordinates of both.