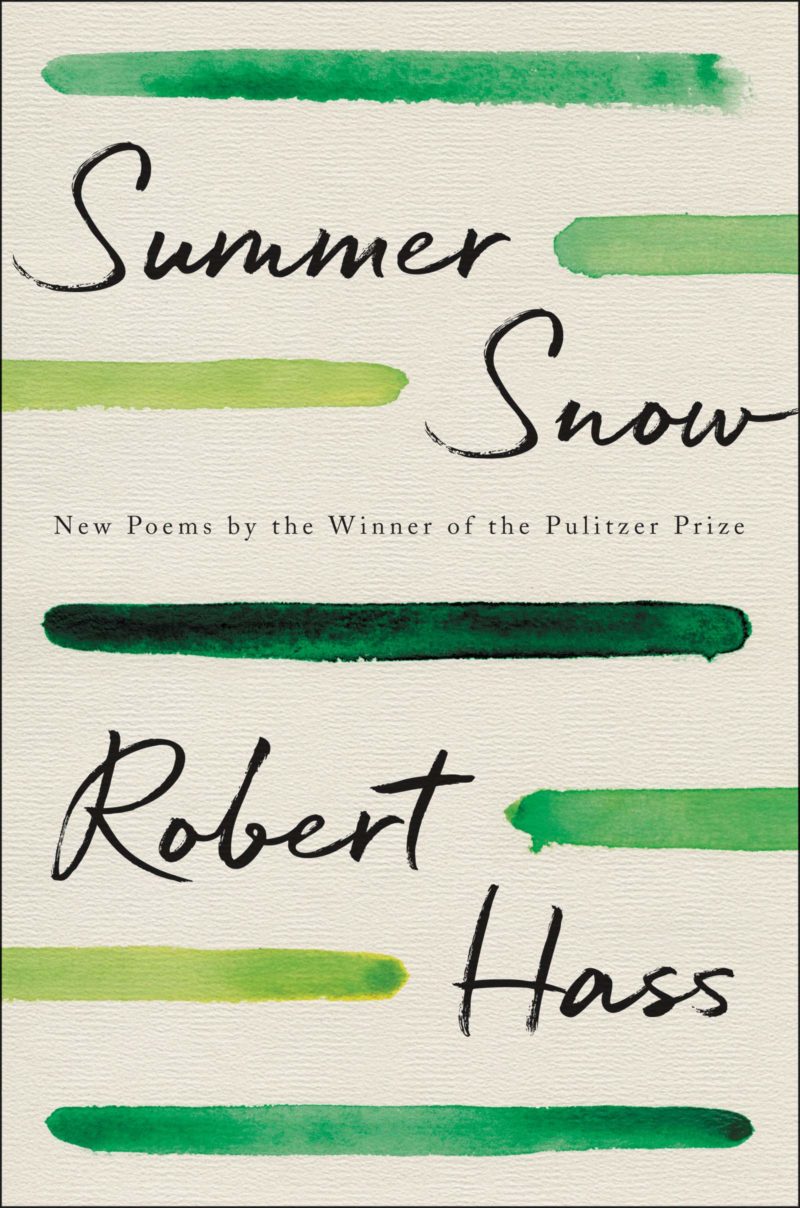 Summer Snow is a rich and substantial new collection from the acclaimed poet Robert Hass. As the former Poet Laureate’s first new collection in ten years, and the length and breadth of the book suggest careful, years-long work. At age 79, Hass’s latest work is often elegiac in some form or another, for people or places or moments in time. Various poems track the passing of poetic luminaries and personal friends, and with an almost ordinary sense of loss, which he aptly gives a name to in the title of a long elegiac sequence, “Patches of Snow in July.” Aware of the heaviness of death, Hass’s verse does not lean towards weariness or despair; to the contrary, it bursts with energy and striking detail. Hass’s style here often tends towards reportage that unfolds in organically shaped lines and long stanzas. Consider this stanza:

Moon’s day. He was a poet
Of the grandeur of wounds.
“My mother’s breast was thorny
And father I had none,” he had written.
And “The night nailed like an orange
to my brow.” He lived to be a hundred
And, visiting him the day after his birthday,
I said, “Stanley, you’re a hundred!”
And he said, “I don’t recommend it,”
Who had watched his wife die,
Raving with dementia
In the hospital room they had made from the dining room
Where he had served us, eyes wide with self-delight,
His own bouillabaisse from a steaming tureen
On a festive fall night thirty years before. [1]

This is a section from a longer poem, “Three Old Men,” which serves as an elegy to Hass’s friend and mentor, poet Stanley Kunitz. Throughout this collection, Hass uses quotes and speech from others that work in dialogue with his own verse, and here, in quoting Stanley, he pulls from both the acclaimed poet and the vulnerable old man. He also makes use of narrative leaps, sometimes drawing from his own singular history to take us back into a different literary era, a glimpse into the circles of literary giants at their prime, and a glimpse into their homes as well.
This collection includes short, lyrical poems, as well as lengthier long-lined narrative verse that delves into stories and witness. There are several “notebooks” that unfold direct experience; poems that read as travelogues, situated across the globe and across history, while always returning to the poet’s Sierra home. Hass writes on subjects like modern warfare with the raging energy of a younger poet and the careful precision of age and experience. With an amalgamation of styles and subjects, the entire collection itself can be described as a long, hefty notebook in the best of ways. Summer Snow seems to unfold organically with much original thought and meditative consideration of the poetic art from one of its masters, a poetry he envisions as “sheet lightning in a summer field.” Readers will want to return to it again and again.

Summer Snow is available for purchase at HarperCollins.