The Unsubordinated Self: a Review of Dana Roeser’s “All Transparent Things Need Thundershirts” 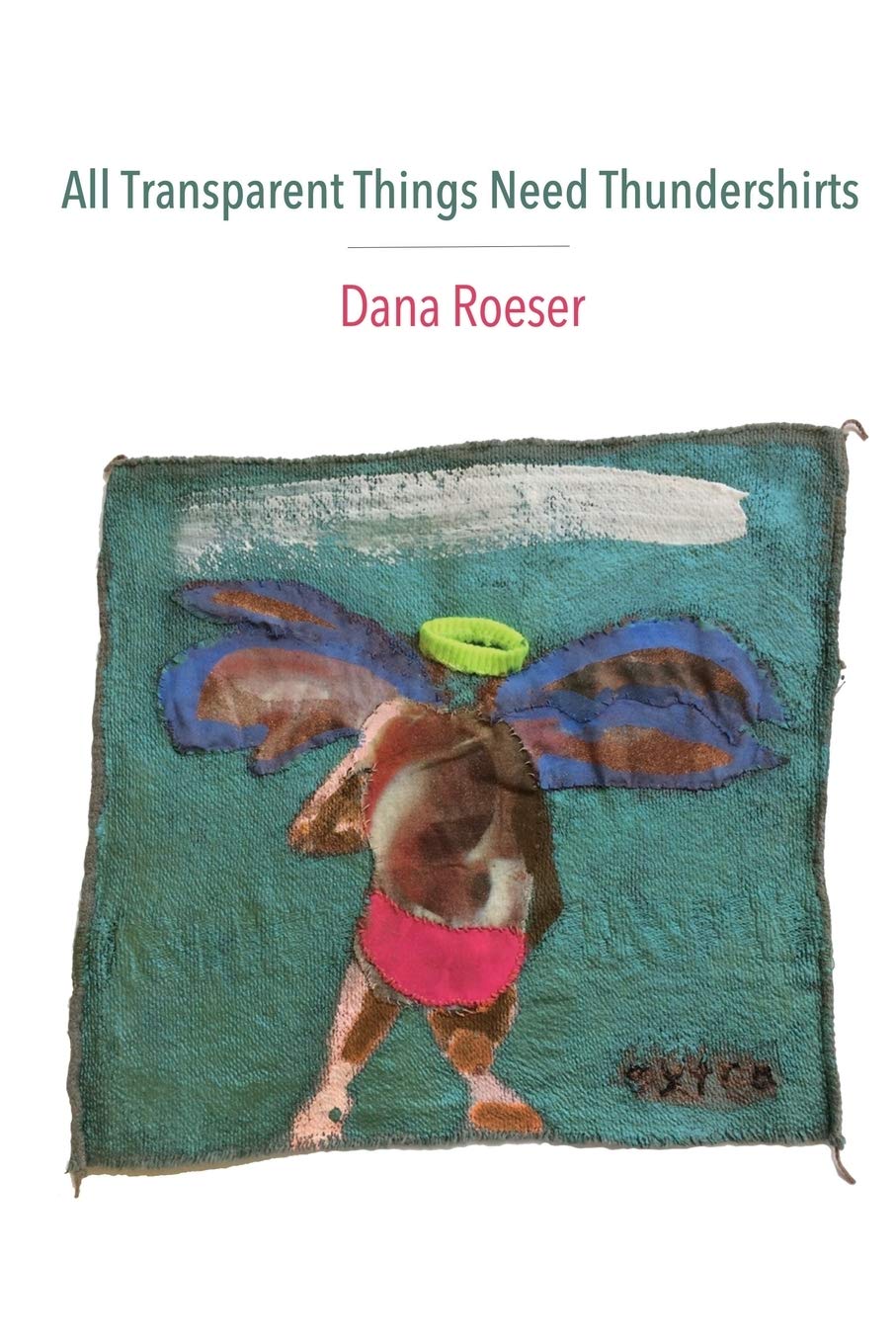 “Love Calls Us to the Things of This World,” wrote the poet Richard Wilbur, paraphrasing St. Augustine’s Confessions, Book X. In a revision of Wilbur and Augustine, the speaker in Dana Roeser’s fourth poetry collection confesses: “Clutter keeps / me bound to this / earth.” The things of this world—the clutter of our living—is an apt ars poetica for the sixteen long, densely-pieced and threaded poems that comprise Roeser’s All Transparent Things Need Thundershirts. As in Wilbur’s poem, a conjoined exhaustion and jubilance fills Roeser’s book. For example, “The thing with / diurnal / journal-type / occasional poems / is that one does / get tired,” admits the speaker in “Poem Starting with Dry Cleaning,” and yet, “Zumba is / fantastic! It is pure joy,” the speaker also observes. These poems ride horses into a hurricane while dealing with the physical (and spiritual) fragility of the self and others—with addiction, age and illness. In “Letter to Dr. M.,” the speaker asks her doctor for activity approval after the fact—“How about riding a horse / in a tornado?” and adds,

in general. Or rescuing
horses in a debris-strewn

windy pasture in the dark
after. Who are hysterical

The rescued horses, described as “Hysterical // and afraid,” are a powerful image that stresses the animality of emotion—humans do not, it shows, have a monopoly on feelings, on terror. Relatedly, in “Transparent Things, God-Sized Hole,” the speaker muses, “All transparent things need / thundershirts” (a compression vest that alleviates anxiety in dogs). Even the wind, the speaker argues,

is its own
kind of chaos,
sometimes like a sheet
of itself tangled
or flowing
on a celestial
clotheslines. It needs
a weighted blanket.

Not only the wind and dogs need such material aids, but the corner maple tree: “Flags / hold the tree down, / mark it, make it know / it’s real.” It is by touching and communicating with others, with things, that the speaker understands her world—by the image and animal comfort of the thundershirt, the weighted blanket, the red flags on the maple tree. “Clutter,” in fact, which the speaker says keeps her “bound to this / earth” finds its own weight in its connection with ritual and relic, as the found silver rosary in “Transparent Things, God-Sized Hole” attests, or the presence of the piece of Paul’s wrist bone and “part of the / column where St. Paul / was beheaded” in “A Tour of Pauline Hot Spots in Malta, In Which I Boast of My Humiliation.” In poems like “Poem Starting with Dry Cleaning,” the reader learns to hold the everyday relic—the nail clipper on the father’s walker seat in the assisted living home, the emery board, the files of photographs—with gentle hands. The clutter of life binds us, too.

Clutter is integral to the forms of Roeser’s poems as well; it is difficult to lift a line out from its siblings, or find a line entire in itself. Instead, enjambment is the dominating feature of the poems, many of which take the form of narrow couplets that travel in poem length up to eleven pages. One consequence of the enjambed, travelling couplets is that the poems read like a journal, or a letter. In fact, the formal tension of the couplet loses itself in the speaker’s voice and the poetry’s multipart narratives—and this is an interesting formal experience in a book of poetry, because it causes the reader to ask: what purpose does the poetic line serve? And the answer seems to be, in part, that (à la Gertrude Stein) voice takes precedence—although, unlike Stein, it is a voice growing out of conversations and stories. Form, in Roeser’s work, becomes a slight container for larger things. In a 2017 interview with Megan Denton Ray at Sycamore Review, Ray asked Roeser about her poetry’s form, specifically as regards her frequent use of short line breaks. Roeser answered,

“I don’t always have aggressive line breaks, but the main idea is foregrounding the material—whether it’s lyric or descriptive or people speaking or whatever—it gets the same treatment in the line. It keeps everything at the same level. It makes everything equivalent. It helps to bring the material forward. As I’ve said to students before, in my opinion, what you don’t want is a poem that has subordinate clauses, thoughts, ideas… you want to bring everything up to the same level of unsubordinated declaration. Sentence syntax, and the full stop, the period, create counterpoint, syncopation.”

Poetry without subordination—where the things of the world and the clutter are present as declaration rather than subordinate grammar, is an intriguing element of Roeser’s All Transparent Things Need Thundershirts. Philosophically, there is something of the unsubordinated self in Roeser’s work as well, in her crushing, Zumba-dancing, horse-riding, travelling speaker. In “Crush,” the speaker annotates the various meanings and experiences of the word “crush”:

to fall for a garden variety
womanizer with whom I have

nothing in common. And I’m not the
only one. Whole twelve-step meetings

filled with women who have washed
their hair. I feel like giving that thing

a blow to its head. But it keeps
sashaying up to me when I’m shaking

my pelvis to some pining, thrusting love song in
Zumba class-like a Cat-5 hurricane

in the Wall of Wind simulator.

The scene before us is one of women not crushed by their environments—women who have something for which to wash their hair (or, someone), the speaker included. It is a life open to clutter, to crushes, to exercise, to addiction and to healing. Hair washing, often an image of women’s work and women’s relationships in poetry (as in Elizabeth Bishop’s “The Shampoo”) connects with many other instances of a woman speaker in Roeser’s work. Take the poem “The Inn at Tallgrass,” where the notion of the crush and the speaker’s visiting writing job and loneliness come together:

But loneliness
was a place I hove
close to. Even all those years
with children. In my giant-

toe-box running shoes, I
visited parks I never showed them.
Now they are gone. And for
the short term I am living away

from the graveyard
of their childhoods. It’s the
natural order of things
for them to go.

The loneliness of women—the loneliness of a woman who has children—is a qualitatively different kind of loneliness. It is often something desired, something a woman must be fierce about protecting, something she must pursue as someone else pursues company. “I am returning // to what I’ve craved,” says the speaker in her “upgraded / hotel ‘apartment,’” and yet she does not finish here, in her loneliness, but adds:

To live alone.
To wait for the right man.
A man, dark and sparkling, Adderall-
addled-whose name

is inscribed on the boat
of my undoing.

In the speaker’s fantasy, such a man comes along—and what do they do in her dream life but, “Settle down and have a child.” Never so easy, says the poem as the speaker realizes,

name but Grief? Loss of the job
I held and loved for
years; of my treasured father; of
Eleanor and Lucy, my daughters.

The speaker cannot be pulled from her griefs, they are a kind of company (and loneliness, too), although only realized in a quiet space where introspection is possible. The main threat to the speaker’s solitude is her visiting husband, whose interruptive presence highlights the reality that there are many things a woman must protect in order to be a poet—her time, her body, her quiet and writing hours, the hobbies, friendships and labors that nourish her work. Roeser’s poetry is a haven for all these things, her speaker in pursuit of the unsubordinated self that is nonetheless tied to others and interdependency. In this sense, the grammar of All Transparent Things, its long poems with their roving lines and many narrative anchors, does succeed in formally imaging the interests of Roeser’s poetry and the poet’s many ties to her world.

All Transparent Things Need Thundershirts can be purchased through Two Sylvias Press.

Hannah VanderHart lives in Durham, North Carolina, under the pines. She has poetry and reviews published and forthcoming in Kenyon Review, The American Poetry Review, The Adroit Journal, RHINO Poetry and elsewhere. Her book, What Pecan Light, is forthcoming from Bull City Press in Summer 2020, and she is the reviews editor at EcoTheo Review. More at: hannahvanderhart.com